The One Who Never Left 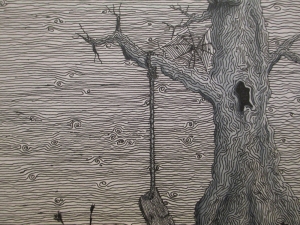 Writing to You: Ghosts of What Never Was

Do you ever spare a thought,
For the one you forgot,
Your misbegot?

Do I cross your mind,
With a thought unkind,
Or am I left behind?

But I know I do not,
For in everything I sought,
I knew it was all for naught.

Because I can see,
That it’s not me,
And we will never be.

No matter what I do,
Nor how much good I sew,
It is not enough for you.

I want to stop writing to you, or you, or even you. It’s pathetic at this point. There’s nothing but pain and sadness in the words I can give to you, for that is all you’ve given me.

I want to write to Her. I know there is something happy to write about there. Even if she turns out to be you, there will be a period of happy things to write. I expect to die alone, so I very much look forward to those brief times when you are Her, even though I die each time She becomes you.

Welcome Home – Part 1 of ‘The Ongoing Story of Him’

This was the 4th drawing I made one night and the first in what would be an ongoing series dedicated to my own life. When I drew it, I had just switched from Holywood to Good Apollo I’m Burning Star IV: From Fear Through the Eyes of Madness. Until now, I hadn’t ever given much thought to how perfect that album title was for the situation. In truth, it was chosen because it is a favorite album of mine and it soothes me. I draw much inspiration from it, having heard it hundreds, if not thousands, of times since I found it. It is one of the most important albums in my life, and it seemed only fitting that I would listen to it this night.

The original plan for the drawing session had been to listen to all 3 of Marilyn Manson’s albums about his fallen god in order, but after I finished Holywood, I started to think about the woman I was kinda-sorta involved with at the time and how that relationship actually existed. Being in the state I was in, actually seeing that I was not special to her in the ways I needed to be special was threatening to collapse my psyche and throw me into a downward spiral. So, I hastily changed albums and settled on something that I knew would bring me back from the brink and put me back into a safer place. It was my safey-safe. And there began my journey in art and self-exploration.

The upper right – ‘I almost lost you’ – came about from nearly spiraling when the album changed from Holywood to Mechanical Animals. When it was averted, I simply wrote the line on the page. At the time, it felt like a note to her, but looking back, I think it was just as much a note to myself. I nearly lost my mind delving into a situation I really wasn’t prepared to deal with that night (it took me nearly 8 months from that date to finally confront it and I’m still dealing with it today).

The words are ‘*MROW*, ‘My Dear’, and ‘Whore in Sheeps Clothing’, which come from “Keeping the Blade”, “Always & Never”, and “Welcome Home”, respectively. At the time, they were written to my first. They were evocative of our childishness (the *mrow*’), my unrequited love (‘my dear’ crossed out), and my eventually pain and lashing out (‘whore in sheep’s clothing’). They are floating in the scribbles, buried in them and written upon them. They were always on my mind, as the scribbles represent. But they were also shrouded in chaos.

These words were just the ones that came through as I was drawing, but the entirety of the lyrics of the three songs represented here capture the emotion conveyed within. They speak of the pain of loving and having nothing returned. Of wanting and not being needed. In “Always & Never” the Writer says ‘I’m still waiting here, my dear/For one kiss from you’. While this, to me, speaks of loving and wanting, there is also a literal interpretation in my own life: I had just one kiss with my first love, a very chaste peck on the lips, and I have been waiting for the next one for the past ten years. Not from her, but from anyone. With ‘a whore in sheep’s clothing’, I am not wanting to call her a whore. More accurately, it is about her being something other than what I saw and my inability to cope or be with what she truly was. I loved what I thought I saw, but the reality was far different from what I wanted and needed.

While I had my first in mind when I drew this, it turns out that it was quite apropos to the situation I was dealing with at the time. So much of that played out as an accelerated replaying of my first kinda-sorta relationship. It’s eerie. Even the names were similar. I cared deeply for both of them and they both came about during very chaotic times in my life. Looking back, it seems that the last one was there to close out the first. Through it, I found closure. I was finally able to put her to rest and move on from her. And while I am still working on moving past the latest, I was not crippled the way I was with the first. This time, I am hurt but I am not giving up and running from it all. I have chosen to stick around and deal with it, even if I can no longer do it directly with her.

This series, taken from a single night of drawing, was drawn with my future in mind. When I did it, I thought it dealt with who I was talking to at the time. I wasn’t wrong, exactly, I just wasn’t right about what it meant. She was there, but not as I saw her. She was a ghost reborn and she exited far sooner than thought. I think that going over all of this and finally posting it all and talking about it will be my way to say goodbye. As I lay it bare to the world and analyze it in the written word, I am seeing it in a new light. I am finding things within it that I hid from myself before. It was far deeper than I ever expected.

I showed all of this to her, but it didn’t go as planned. I had hoped to share it with her, but I ended up just showing it to her. I think that was part of why I decided to leave. It was then that I realized that things were not as I had seen; that I had blinded myself to her because I was in need of closeness, which she could not really give. I had imposed things upon her subconsciously that she could never have lived up to. For that, I am sorry. For the rest, I am hurt.