A Week of Drawings, Day 7: Clarity/Chaos 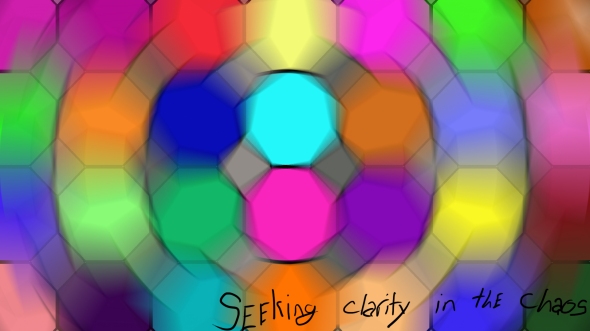 Decided to play with patterns and effects today. Didn’t need the tablet for much, but this exercise of drawing one picture a day has been about exploring creativity more than anything else. I bought the tablet to urge that along, but the tablet is not always necessary. There are still things I will do better with the mouse and random effects/tools.

Now that I have come to the final day of this exercise, I’m going to shift focus on this blog, again. Thus far it has been everything I have needed. It has been my sanity and my catharsis. It has allowed me to start opening up about everything in my life and to explore myself further. However, I have done all of this at a furious pace. While I know that this blog is completely self-indulgent and that readership is tertiary or lower, I am aware that there are people that read this and such a hard pace can make that difficult. So, I want to adjust it and focus myself.

I want to try and start focusing more on the quality of the content now. I’ve got more than enough fodder here for people to read for quite some time while I work on figuring out the next step. Given that, I would like to try and start taking my time with posts and actually craft them rather than let them spew forth from me. I know I have strong writing abilities, I just need to try and focus them now. I have poured forth much of my soul in these first 55+ posts, but now I need to bring my intelligence and thought to it. It is time for me to start focusing all that has swirled around inside of me as I wrote the previous posts and form it all into discussions of these things rather than ramblings diatribes to myself. As I have stated before, there is much that I wish to do with blogging and the internet in general. This change is a move toward doing more of it.

I am trying to decide if I want to go with a cadence of weekly or every 2-3 days. Figuring this out may mean a short lull in posting, but I will try to avoid that. I may shoot to have a big topic once weekly with art, music, or other things on a secondary schedule. I believe that I will also set up a Facebook page for my art so that I can post it there when it is finished and then highlight certain pieces here.

I also need to decide if this change necessitates a new blog dedicated to this scheduled and more polished style. I think it would look cleaner, but I am unsure of whether I want to do that or not. If I did, it would mean setting it up as a more professional blog while leaving this one for my personal stuff that I have been doing.

And, with that semi-coherent mess, I will post this and sleep. I will see you all on the other side of it all. 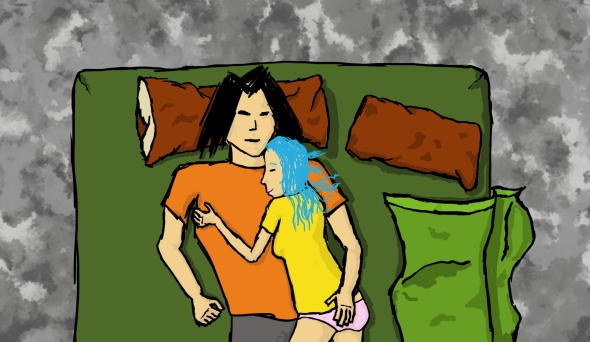 On of the more detailed in the series so far. I had initially planned to make this an animated gif where she faded away, but after I finished it I couldn’t bring myself to remove her.

This one is… yeah. One of those ideals I don’t expect. These images so far have been snapshots of all that I want and have talked about, mostly. It feels good to get the image I see in my head onto paper, er, whatever this is. I’ve got one more left, though I don’t know if I’ll have time. I’m leaving to go spend some time with my sister for her birthday, then sleep, and then I should be going out tonight for the first time in a few weeks. Hopefully I’ll get something up for day 7. If not, I’ll finish it Sunday.

Not much to say on this one, really. I had a good talk with my best friend yesterday so I thought I would draw something involving friendship in some way.

I have something big planned for either tomorrow or the next day. I am off for two days, so I plan to spend more time drawing. Who knows, I may even take my lappy and tablet with my Friday night and draw drunk. I don’t think I’ve ever drawn drunk. On acid, yes, but never drunk. I still need to post those pics…

A Week of Drawings, Day 4: Screaming in the Void

I had had a very different idea in mind for this particular image, but I had thought of it in the midst of wracking pain as I fell asleep and forgot what it is I had wanted to say on it. The background is meh, in my opinion. I would’ve preferred to do something more, but I don’t have that skill yet. I could have gone and found an image and used it, but that’s not really my style. It gets the message across though.

There’s also a fair amount of fandom in this, though at least one of them is entirely my own interpretation of it. I’ll not say what they are, as I prefer to leave it to be found by the audience.

A Week of Drawings, Day 3: Battle

Something new, kinda. The tentacles show up from time to time. Not sure why. The rest of it is just playing around and learning. I would like to get to the point where I can do stuff in a finer manner. I’ll get there soon enough.